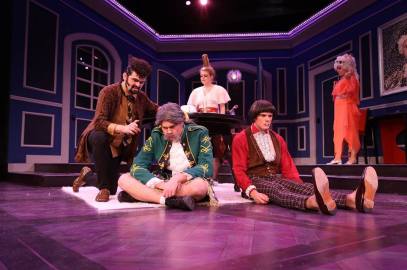 Family drama, hypocrisy, censorship, satire, comedy, democracy. These subjects of everyday drama unfold fantastically in this tale of the infamous scoundrel whose name, “Tartuffe,” has become synonymous with trickery.

In addition to rich relational comedy, Molière’s masterpiece is full of complex characterization and political satire.  The religious and political arguments (the two were almost inseparable in the 17th century when the play was written) are impossible to miss in the performance, and prompt further discussion and discovery. The essay below focuses relevant context for understanding the circumstances of the play’s creation, as well a basis for its interpretation. As is evident with all truly great works of literature, there is an infinity of meanings to discover. Enjoy!

100 years before Molière was born, an idea sprung up among Western theologians that the common man was equipped, empowered and encouraged by the Holy Spirit to engage in a personal relationship with God and preach His word. Previously, the Church stood as the primary intercessor between man and God. Post Reformation, the body of Christ became its own priesthood. This priesthood grew to encompass the dangerous recognition of man’s ability to think for himself and later, to even govern himself.

Molière wrote during the first heartbeats of the Enlightenment, a time when freethinking was still a threat to monarchical society, (as much so as the American Revolution 100 years later, and was based in the same ideals). The Academie Francais, empowered by that Court, became the “watchful overseer of [France’s] conduct,” to seemingly protect the public from a story and a truth that would cause them to doubt the authority of the French government and the Church. In other words, the Academy claimed authority of a high priest: spiritual, moral and educational advisor of society, primarily the arts: literature, music, visual and performance art.

There is a vital connection between our responsibility as a priesthood of believers, and our freedom to exercise that same individuality when examining our world, particularly the art that attempts to represent it. Tartuffe was repeatedly censored because it represented the injustice of attempting to micromanage the creation and reception of art. Tartuffe is an advocate for the cultural mandate, the freedom and responsibility to create and express as a function of how we are made to glorify God.

Attempts to control artist and audience alike, taking hyper-control over what the audience sees, making changes based on what they judge the competency of the audience to be, undermines this mandate. Such manipulation desires to instruct, but allows no room for questioning or growth. The result is the dumbing-down of the audience. At Taylor University, we believe that God’s truth is the foundation for all other truths. Therefore no amount of discovery, no hard questions, no difficult challenges can threaten God’s sovereignty. We believe that the pursuit of truth through these methods takes us to excellence in our intellectual pursuits by bringing us deeper into the knowledge of and relationship with God. We have found God’s truth in this play, through the characters’ testing of true and false piety, the pain caused by deceit and self-serving behavior, and the mismanaged quest for identity that results in selfishness and hypocrisy. But rather than confine your interpretation of the play to our discoveries, we hope that this work will inform and inspire your own understanding.

At Taylor, we value and liberally exercise the freedom to express ourselves diversely, recognizing the development of self as a purpose of art. The freedom and validation of expression and interpretation applies to both our participation in our faith and our participation in the arts. Moliere’s intent was that, rather than forcefully instruct, Tartuffe should engage the audience in learning, interpretation, and conviction. There is not one right interpretation of this play, nor one correct presentation of its themes. What each team, director, artist, actor, and audience make together constitutes a supremely unique product. We will not censor your experience, nor control your interpretation.

By our own adherence to the cultural mandate, we utilized our insight and talent to create a production that offers you the nobility and independence provided first by Molière: the choice to receive from our production all that your unique perspectives inspire.